Vivian Chan Shaw > About Us 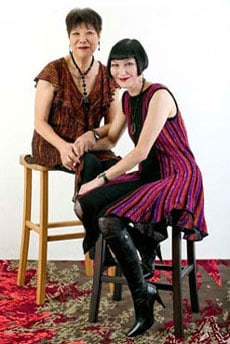 Vivian Chan Shaw started her fashion career in Sydney in the 1960s as designer and fashion co-ordinator for leading bridal fabric specialists, René and Canns, and moved on to fashion retail as a manager for the In Shoppe and the House of Merivale.

With this background in design and retail, Vivian opened her boutique Jeunesse in 1972 in the Royal Arcade under the Sydney Hilton Hotel. Here she established a following for her exquisitely detailed designs, made from jersey, silk and panné velvet. Her adventurous handmade one-off garments caught the attention of international stars Dionne Warwick, Bo Derek, Margaux Hemingway and Roberta Flack.

The 1980s saw the designer switch from fabric designs to her internationally acclaimed hand loomed knitwear. Vivian Chan Shaw moved to Sydney’s Queen Victoria Building in 1986 and the flagship store operated there for 28 years.

Claudia Chan Shaw, Vivian’s daughter, officially joined the company as business partner and co-designer in 1986. Together the mother and daughter team became one of Australia’s ground breaking early exporters, selling the label in the USA from as early as 1981. Iconic American stores Bonwit Teller, Neiman Marcus, I Magnin, Nordstrom and independent boutiques in New York, Chicago and Los Angeles all stocked the distinctive Australian label. Chan Shaw designs have also sold in the UK, Germany, Switzerland and New Zealand.

In 2009 Vivian was the recipient of the Fashion Group International Lifetime Achievement Award in recognition of her work and her contribution to the Australian fashion industry.

In 2013, Claudia Chan Shaw curated Vivian Chan Shaw, 40 Years – A Retrospective; an exhibition of over 100 garments, exploring the work of this celebrated Australian fashion label and icon.

Vivian recognised early in her career that to survive in the fickle fashion world, one had to be unique. Her timeless hand loomed knit designs prompted Sportswear International magazine to call Vivian Chan Shaw “A master of knit who would rival the Missonis.” Australian Harpers Bazaar has called her “The queen of Australian knitwear”.

From early elaborate pieces made in fabric, to the evolution of the artisan hand loomed knit garments, where the boundaries of craft and fashion are blurred, the Vivian Chan Shaw label has one of the world’s most distinctive design signatures, where knitwear is explored with unprecedented depth and sophistication.